The recent Twitter campaign #YesAllWomen has arisen out of the response of some men to the murder spree that left seven dead in California, including the alleged gunman who was unequivocally motivated by his misogyny. The response was, Not all men are like that.

Anyway, the defense of #NotAllMen sparked a boatload of #YesAllWomen tweets describing some of the disrespectful, abusive, violent, and all too often deadly experiences we women have all faced in our lifetimes. Yes, I know some men have also had to deal with disrespectful, abusive, violent, and sometimes deadly experiences, and this is not right. But those men are rarely disrespected or abused or killed simply because they are male. On the other hand, virtually every single woman everywhere has been targeted for disrespect, abuse, or even death simply because she is female.

#YesAllWomen encourages women to share their experiences, so I have decided to add my voice. I don’t do Twitter, so my forum is my blog. I’ve led a pretty tame life; I imagine that most women have experienced more and worse disrespect and abuse than I have. And that makes me sad because my list contains some pretty abhorrent things. And it makes me sad that my list includes only some of the disrespect and abuse I have experienced simply because I’m a woman.

Some are just embarrassing or humiliating.

I started attending high school in the 8th grade. There were about 1800 students in my high school from grades 8-12, and 8th and 9th graders were required to enter the building via the front door, where we had to run the gauntlet of the junior and senior boys. I had the misfortune of being fairly well-endowed, so I was singled out for lots of lewd remarks. I learned to enter the building as quickly and inconspicuously as possible and to avoid making eye contact with my harassers at all costs.

But the harassment didn’t end there. One day I was at the pool wearing my new two-piece bathing suit for the first time. This was the mid-1960s. It wasn’t a bikini. It was cut exactly like this one, but in a pretty blue and green flower print. 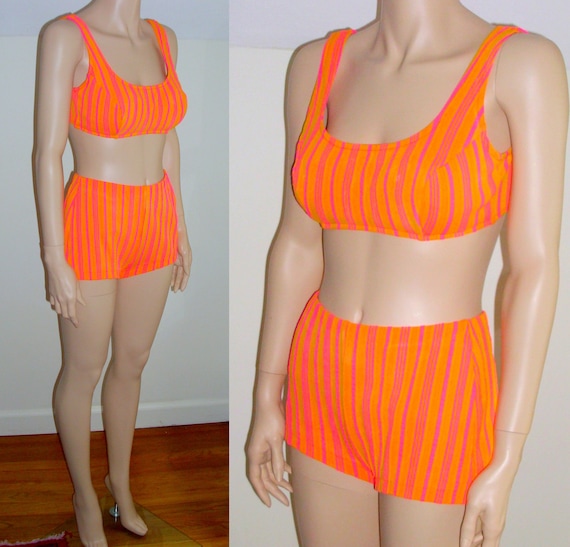 But because I was well-endowed, there was a teeny-tiny bit of cleavage that showed, maybe half an inch. The roof of the building that housed the concession stand and changing rooms was flat and made of concrete with a railing around it. People could walk over to the railing and look down on the pool and the area around it. As I was standing in front of the concession stand, I felt something hit me. Then it happened again. A couple of pennies hit the ground. I looked up and saw that some high school boys were trying to drop pennies into my bathing suit top. It was humiliating. I walked away to a chorus of guffaws, and when I got home, I got out a needle and thread, turned up the facing in my bathing suit top, and sewed it into place so that it would cover the tiny bit of cleavage that showed. It wasn’t stylish, but it put a stop to the penny-pitching.

Then there was the sexual harassment at work. I won’t get into any details except to say that it occurred when I was pregnant. Yeah. But I will say there was a happy ending. My harasser eventually saw the error of his ways, apologized to me, and admitted that the blame was entirely his. He made no excuses. He made no rationalizations. He was genuinely contrite; his apology was entirely sincere.

One occurred when I was working in a research library. Several of us were on our way into the building after lunch on a beautiful day. There was some construction going on around the entrance to the building. All of us had been harassed by some of these men before, but none of us wanted to walk all the way around to the other side of the building to avoid them. After all, it was our place of work, we had every right to be there, and we had every right to enter our place of employment without being harassed. As we walked up the steps to the entry doors, we received a chorus of lewd remarks. I said something back to them. As I recall, my exact words were, Eat shit. And they were actually taken aback. They seemed to think that we should have been flattered by their lewd and degrading remarks. I wish I had been more eloquent–adrenaline ties my tongue–but they seemed to finally realize that their attentions were unwelcome even if they didn’t understand why.

A couple of years after the incident at work, I was a stay-at-home mom with an infant. It was part of my routine to take a walk around the neighborhood twice a day with my son in his stroller. We had a route that we followed that took us past a home that was under construction. There was a lot of new-home construction in our neighborhood at that time. So, one day, I’m walking down the street that I always took and I’m passing one of the houses that’s under construction. I’ve walked past it every day since the construction started with no problem. But on this day, the roof is being put on. By Amish men. By foul-mouthed, disgusting, Amish men who think it’s amusing to yell lewd stuff at a mother walking her baby in a stroller. Would they have yelled lewd remarks at my husband had he been the one walking the baby? I changed my walking route until the Amish workers were gone.

Here’s something that has happened to pretty much every girl or woman. I’m 13 or maybe 14, and I’m walking home from a dance at the high school. It’s about 11:15 at night, and I’m about two blocks from my house. I had left the dance with my friend and we had walked together as far as her house, but I have to walk the remaining six blocks to my house by myself. It’s no big deal until a car comes down the street and slows down as it approaches me. There are two men in the car, one of whom is leaning out the window making smooching noises at me. He has a pack of cigarettes rolled up in the sleeve of his T-shirt. They offer me a ride, tell me I’m pretty, then start getting a little belligerent when I totally ignore them. I’m starting to get scared. I think to myself, I’m only two houses away from the Rines’ house, and their porch light is on, so I will just go up on their porch and open their front door and walk in. If the door is locked, I’ll just knock until someone answers. Fortunately, I didn’t have to barge in on the Rines. The men drove away, and I ran the rest of the way home.

When I was in college, I was walking to my off-campus apartment one night. It wasn’t late, only about 8 pm, but it was dark. I was just a couple of blocks from home when I heard someone walking behind me. It was a man, and he started talking to me, calling me girly and saying things that made me very uncomfortable and scared. I ignored him, and he said, Girly, I know you can hear me. I didn’t know what to do. I was afraid that if I turned around and looked at him, he would come at me. I was afraid that if I said anything to him, it would encourage him. I was afraid that if I continued to ignore him, he would get angrier and attack me. So I just took off running as fast as I could and hoped that he wouldn’t follow or wouldn’t be able to keep up. Fortunately, he didn’t chase after me.

I was still in college when I was outside a bus station waiting for a bus, along with a few other people. It was fairly late, around 11 pm, and the bus station was closed. That’s why we had to wait outside. Anyway, as we were waiting, a man approached me and propositioned me. If I’d have sex with him, he’s give me $5. Did this guy seriously think I was a prostitute? I was sitting outside the bus station with my suitcase along with other people who were all waiting for the bus. I was wearing bell-bottom jeans, socks, Dr. Scholl’s sandals, a T-shirt, and a wool woman’s suit jacket. I told him I wasn’t interested. He didn’t want to take no for an answer. He said he’d pay for a room in the hotel (flophouse) across the street. I told him again I wasn’t interested. He started hassling me, but the man sitting beside me, who was waiting for the bus just like me, told him to take a hike. He wouldn’t take no for an answer from me, but when a man told him, The lady said no, he left me alone. I’m grateful to that man for speaking out.

I won’t get into details here. It’s too personal and too painful to share it with the world, but here’s the gist.

One time I was out on a date, and when I refused to have sex with the guy, he punched me in the jaw. With his fist.

And one time I was at a party where I was drugged—unbeknownst to me, the wine I was drinking had been spiked with grain alcohol—and, well, I think you can figure out what happened to me when I was semi-conscious.

This is the life of a woman. This is what we deal with on a regular basis. A lot of it is little stuff, like being called a cow or a bitch for daring to disagree with a man. Some of it is not so little, like being called a cunt and threatened with rape for daring to say something or write something that some man disagrees with. Some of it is huge, like being assaulted, raped, or killed. Not all men do these things to women. But these things are done to women almost exclusively by men. And all women experience the little things, and the not-so-little things. All. Women. And far too many women experience assault, rape, and murder, often at the hands of someone they know.

This has been much harder to write than I thought it would be. I’m surprised by how many incidents there have been in my life that I remember. I’m surprised that the number of incidents I remember is so large that I felt a need to pare them down. My happiness that not all men behave this way is drowned by my sorrow that virtually all women are affected by the men who do.