A while back, I purchased a sock pattern through Ravelry called Breaking Hearts Socks by turtlegirl76. My main reason for buying the pattern was to get the instructions for knitting a heel with the gusset decreases on the sole instead of along the sides of the instep. I could have figured it out for myself, by why do all that work when someone else has already done it for me, right? Besides, the stitch pattern used for the sock is awesome, and I’m helping to support a talented designer, so it was a win/win/win proposition.

Anyway, I gave the heel recipe a try when I was knitting the Reversible Ribs Socks, and I loved how it turned out. The heel curves perfectly to hug the foot just right. The Reversible Ribs Socks found a home with the boy’s sock-worthy GF, so I was eager to knit a pair of socks for myself using this technique. And what better way could to use this technique than by knitting the original? It was time to cast on the Breaking Hearts Socks.

The first step in knitting up this pattern was choosing the yarn. I had gone through my sock yarn stash at the beginning of the year and pulled out a bunch of balls of Trekking XXL, which is one of my very favorite sock yarns, so I decided to use Trekking XXL. I settled on a lovely mostly blue colorway that knits up with subtle stripes.

I had a big problem right off the bat. The pattern is written for 64 stitches. If I had chosen a sport-weight yarn for this pattern, 64 stitches would be fine. But I knit socks almost exclusively in fingering weight yarn, and if I knit socks for myself on 64 stitches, I have to knit at a really horrendous gauge–7.5-8 stitches per inch–in order for the socks to fit. I hate socks knitted at that large a gauge. The stitches are too lose and the socks don’t wear well. I like to knit my socks at a gauge between 8.5 and 9.5 stitches per inch.

After casting on 72 stitches, I began knitting the twisted garter edging. For some reason that still baffles me, I couldn’t get the twisted garter edging to work. I knitted it at least five times over the course of two days, and every time it turned out wrong. I don’t know why I couldn’t get it to work. I’ve knitted this edging before with no trouble. I even watched and followed the designer’s on-line tutorial. But I obviously kept doing something wrong because every time I started to knit the first round of the P1, K1 rib, the garter edging was wrong-side out. So I did what any knitter who is frustrated with being such a bonehead would do, I modified the pattern. Enter modification #2. I knitted a ribbed cuff to match the now-modified Breaking Hearts stitch pattern–*K3, (P2, K3) twice, K3  repeat from * 3 more times. I knitted the ribbing for one inch (13 rounds), then started the leg.

After knitting a couple of pattern repeats on the leg, I decided that I didn’t like how the purls on stitches 6-7 and 10-11 in round 3 of the pattern looked with the yarn I’m using, so modification #3 was born. I changed the purl stitches to knit on round 3, but I left the purls in round 6. This removes some of the textured effect of the pattern, but I think the yarn I chose looks better with those purls changed to knit.

I turned the heel, purling 22 stitches instead of 20, and after all the short rows were completed, I had 24 stitches remaining instead of 22. I picked up 20 stitches along each side of the heel flap, then adjusted the instructions to accommodate the extra gusset stitches. I counted 17 stitches from the instep to the heel on each side and placed my heel markers. The gusset decreases were worked every other round on the heel stitches, and when there were only two heel stitches left, I knew I had decreases the gusset stitches down to 36 stitches.

The gusset decreases are on the foot instead of the instep.

I continued knitting the foot with the instep in pattern and the foot in stocking stitch for 14 pattern repeats. It was time to start the toe. The pattern has a toe that continues the Breaking Hearts stitch pattern all the way to the end. It’s a gorgeous design feature, but I could tell from looking at the chart that this toe would be too pointy for my feet. So I decided on modification #5. I knitted a modified round toe as follows: 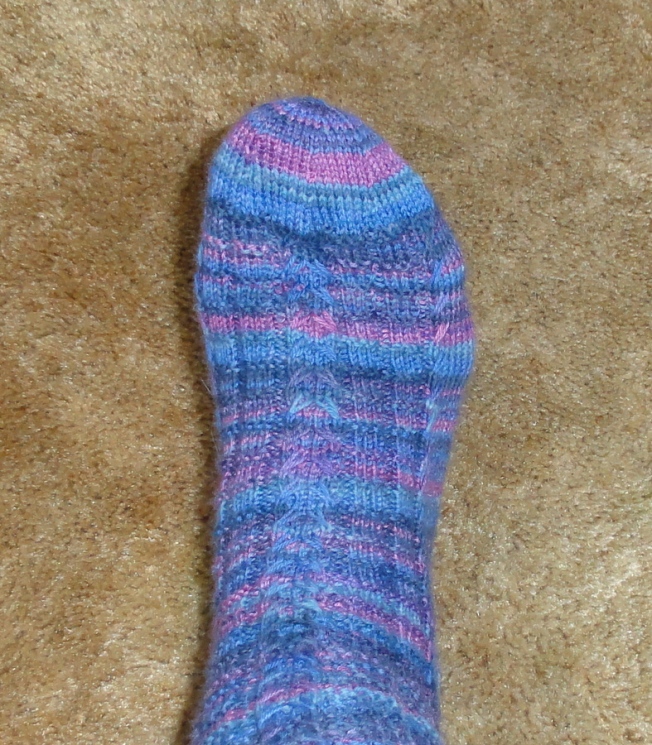 And it fits just the way I like, as does the heel. 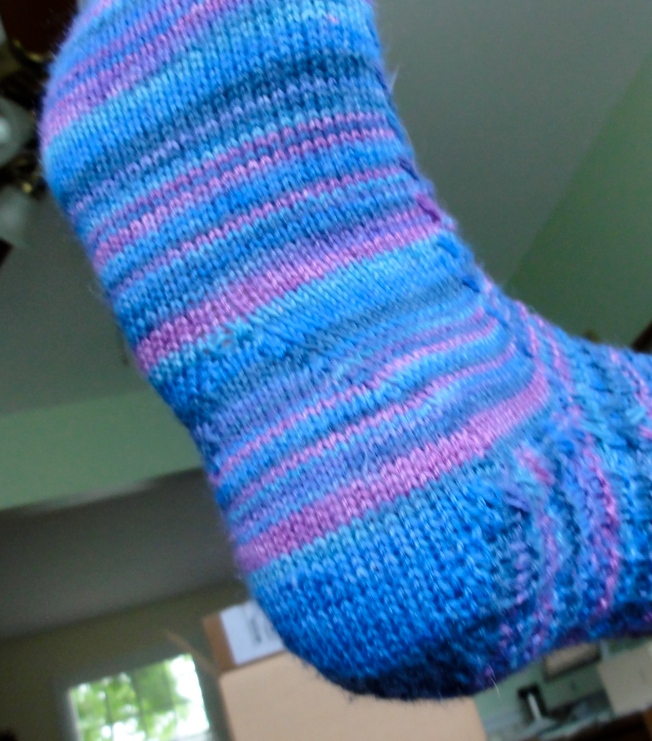 The curve of the gusset hugs my heel. 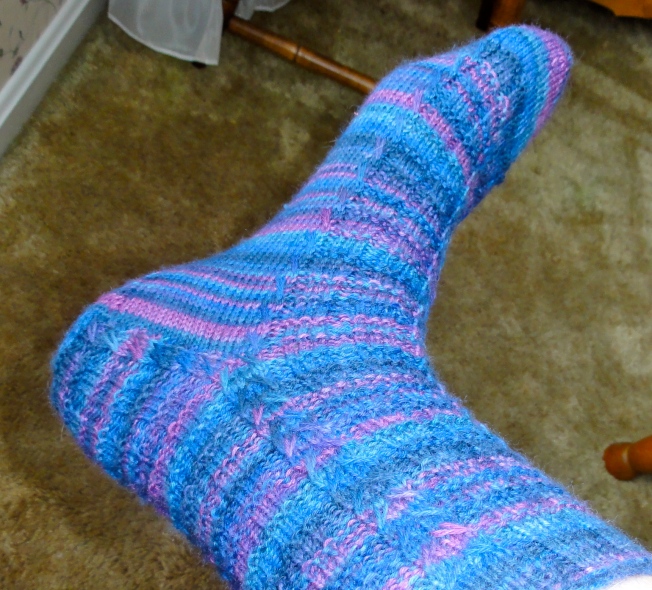 Sock #1 turned out great and fits beautifully. And I made good notes so that sock #2 should be a good match.

I’ve made some serious progress on Reversible Ribs #1. I finished the heel flap, turned the heel, picked up the gusset stitches, and finished the gusset decreases. I decided to try putting the decreases on the sole of the sock rather than along the instep. I’m very pleased with the results. 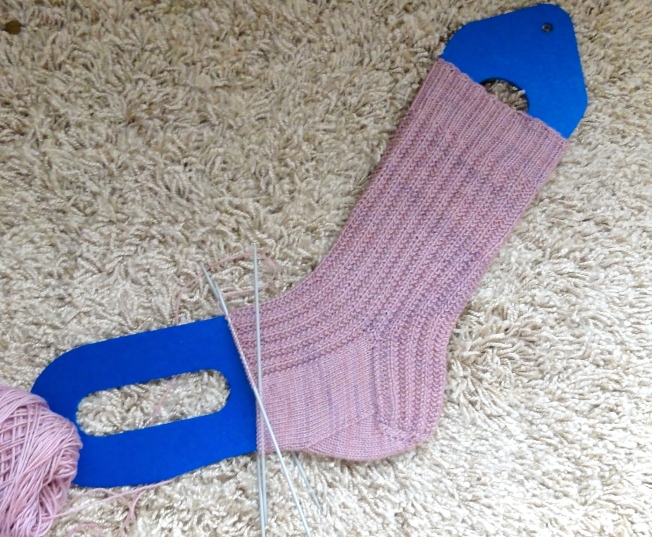 Sock #1 stretched on a sock blocker

A close-up shot of the heel on the blocker

The V-shaped gusset close up 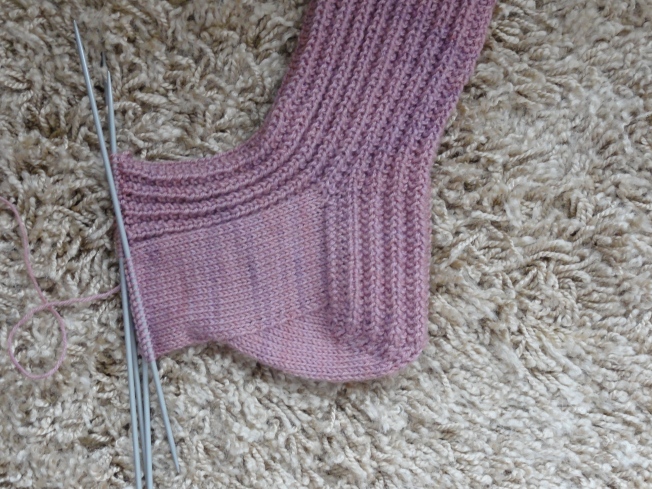 See how the sock curves to cup the heel?

I’m thrilled with how nicely this heel fits, and it looks pretty, too.

I also want to try doing the gusset decreases on either side of the center heel stitch(es) and see whether the fit is as good. My only reservation about putting the decreases on the sole of the foot is my concern whether the two lines of decreases will be noticeable when I am standing on them. The decreases have pretty much double thickness because two stitches have been knitted together. Some people are so sensitive that they can feel the purl bumps on the bottoms of their feet and therefore knit the soles of their socks in reverse stocking stitch so the purl bumps are on the outside. I am not one of them, so I’m hopeful that I won’t notice the lines of decreases under my heel. I sure hope I don’t have a problem with it because I love how this heel fits and looks, and I want to be able to use it again and again.