In an earlier blog entry, I introduced you to the world of UnFinished Objects, UFOs in knitters’ parlance. I thought you, dear reader, might like to meet a couple of my UFOs.

First up is the Stonington Shawl. I started the Stonington as part of a KAL (Knit-A-Long) on the Yahoo! Group, EZasPi, a group devoted to the designs of knitting god Elizabeth Zimmermann. I was using the instructions found in one of her books, the title of which I forget. Maybe The Knitter’s Workshop. Anyway, in the book the shawl is just plain garter stitch, so I added Old Shell for the border.

The shawl is knitted using a technique that EZ “unvented,” and I thought I’d give it a try. I personally think the technique would have been better off not being “unvented,” but I’m sure there are knitters who strongly disagree. Anyway, after knitting the shawl, I ended up with a garment that was too small to be used for anything, and the Stonington technique doesn’t allow for adjusting the size of the shawl by adding more rounds to the border. I decided I had two choices. One was to travel to the frog pond (more knitter’s parlance) and rip-it, rip-it! But ripping it out was not an appealing option because the yarn I used is very hairy and ripping it back is a royal PITA. (That’s a general acronym that needs no explanation.) The only other option, as I saw it, was to knit a second border using the knitting-in-the-round technique.

So I knit the set up rows and set the project aside because, quite frankly, I was sick of looking at it. 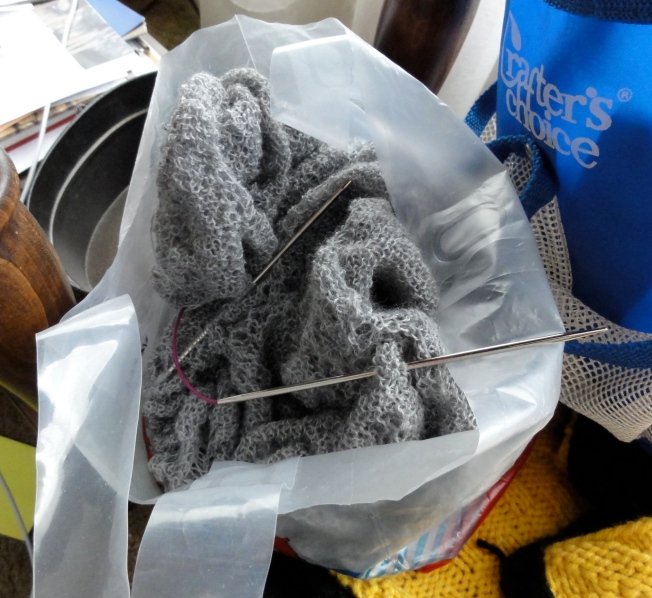 Stonington Shawl in its project bag

But lately this shawl has been creeping into my thoughts, and I think that it will soon become a WIP again. EZ completely defeated me with that abomination known as the Adult Surprise Jacket, but I won’t be beaten again. I will conquer the Stonington and have a lovely, or perhaps not so lovely lace shawl to show for it.

Projects often get set aside, like Stonington, or jettisoned altogether, like the Adult Surprise Jacket, because the pattern just isn’t working for the knitter. But sometimes a project goes from WIP to UFO for more benign reasons.

The latter is the case for my Dale of Norway St. Moritz sweater. The Heilo yarn is wonderful to work with, the colors are beautiful, the pattern interesting.

But because I’m knitting the crew-neck version instead of the zippered version of the sweater, I have to refer to two different charts to knit the central motif, and the charts are on different pages. It’s confusing and tedious to have to go back and forth between the two charts, and it’s easy to make mistakes. Knitting this part of the sweater takes concentration. It isn’t television knitting, at least not if the television program actually requires the vision part. I guess I would describe knitting the central pattern as being okay for television listening, but not okay for television watching, if you get my drift. St. Moritz isn’t football knitting, and it sure as heck isn’t hockey knitting. It isn’t TCM (Turner Classic Movies) knitting, either.

Once I get past the central pattern, St. Moritz will become mindless knitting again. But getting the central pattern done is a big obstacle. And so, here sits St. Moritz, all forlorn, sadly watching me knit lace shawls, socks, hats, all manner of things, while she patiently awaits the knitting spirits to move me to tackle the remainder of that central pattern. 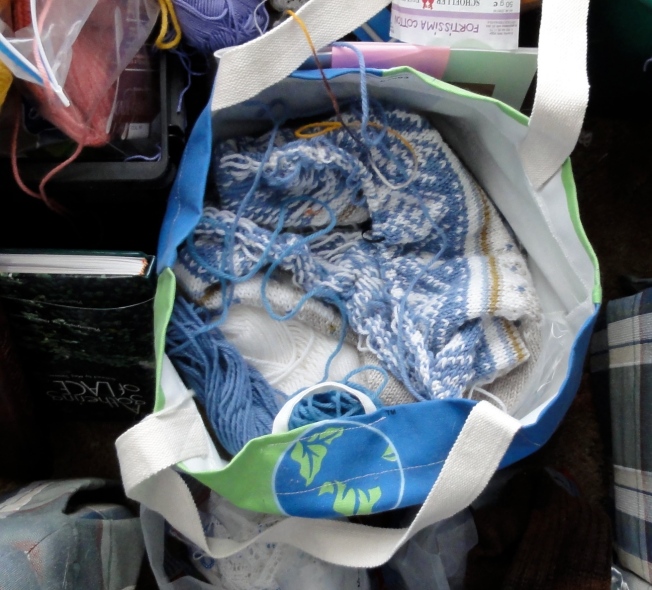 St. Moritz in its project bag