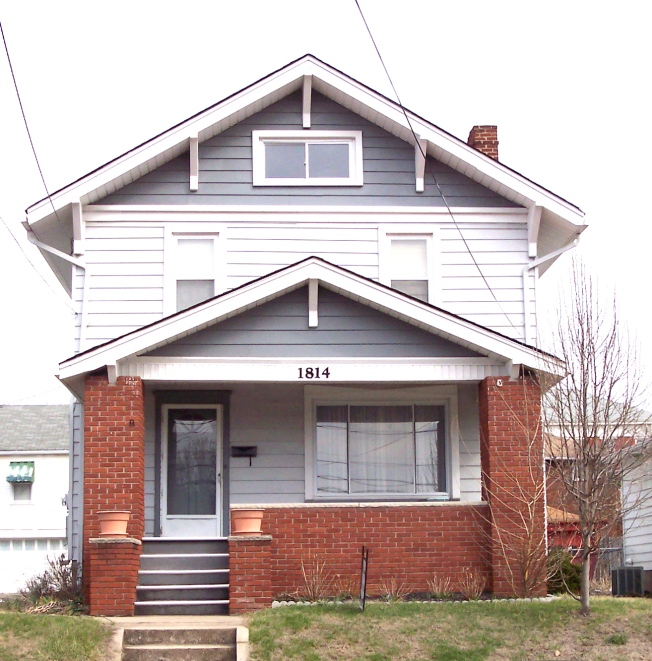 In 1958, when I was seven years old and in the second grade, my parents bought their first house and we moved in just a couple of weeks before Christmas. I well remember the warm December day when we moved in. My older sister and I played in the front yard wearing sweaters! Such warm weather in December was unusual in Moundsville, West Virginia.

The house was built in 1920, and like many houses of that era, it had a coal-fired furnace. I remember the coal truck backing up to the front porch, where there was an opening through which coal was shoveled into the coal cellar in the basement. When the truck left, my sister and I were assigned the task of picking up all the stray bits of coal left in the yard. It took us quite a while, and none of it was wasted. What we gathered up went into the coal cellar.

It was a happy day when my parents were finally able to have the coal furnace replaced with one that used natural gas. No more banking the furnace at night, or getting up in the wee hours of the morning to a freezing-cold house and trudging down to the basement to stoke the fire. No more shoveling coal into the furnace every few hours. No more wiping soot off all the woodwork every single day.

As we kids—me, my older sister, and my younger sister—grew up, we had a lot of good times in that house. Playing hide-and-go-seek or kick-the-can in the alley with the other neighborhood kids, swinging on the swing-set, catching lightning bugs in jars, “camping out” on the front porch on hot summer nights. Even the chores could be fun. Mowing the lawn with the reel mower, hanging clothes on the line, raking leaves in the fall, weeding the vegetable garden.

But the best times were the holidays. Easter brought baskets of candy hidden for us to find, and sometimes gifts, like a brand new fishing rod with a Zebco reel. And, of course, a big family dinner with a huge ham. Thanksgiving, my favorite of the holidays, had turkey with all the trimmings, tons of pies, and, of course, lots of family gathered ‘round the dining room table.

Christmas was the star of the year, with a big gathering of family and friends on Christmas Eve. Turkey, ham, and just about any kind of cookie you can name filled the kitchen and dining room. We ate buffet-style, and people came and went all evening. We got all dressed up in our Sunday best for the festivities. There were stockings hung on the fireplace mantle, and there was always a huge tree, except for the year that my dad procrastinated and ended up bringing home a tree so small that we had to put it on a table. The Christmas bush, as I called it, was really a lovely, well-shaped tree, but it was, well, small. LOL

Christmas Day was a quieter affair, at least once the presents had been opened. Back in those days, Christmas presents tended toward the practical. One year, my older sister and I, who shared a room and a double bed, got twin beds for Christmas, and that remains one of my all-time favorite presents. Sharing a room wasn’t bad, but sharing a bed is a whole other story.☺Another year, we got a portable television set for our bedroom. We thought this was really generous of our parents, but when we got older, we realized that we were given the TV so that they could sleep in a little later on Saturday mornings. We didn’t have to go downstairs to watch cowboy movies, Tarzan movies, and cartoons—we could watch them upstairs in our room. And Mother and Daddy didn’t have to get up so early.

We also got things like nightgowns, robes, slippers, underwear, socks, hats, gloves, mufflers, boots, and winter coats for Christmas. But it wasn’t all practicalities. We got our share of toys, too. Dolls, stuffed animals, board games, and, yes, a big, honkin’ Lionel train. We had so much fun with that train.

Birthdays were also special. My mother made a point of cooking the celebrant’s favorite meal—for me that was hamburgers and French fries—and baking our favorite cake, or, in my case, pie. I often had a lemon meringue or pumpkin pie, complete with candles. LOL  But my favorite birthday meal wasn’t cooked by my mother. The year when I turned 10, my father took me out to eat for my birthday. Now, back in the day, going out to eat was a huge treat. We didn’t do it very often. And going out to eat with my dad, just him and me, was extraordinarily special. I got all dressed up and so did he. We went to the Elks Club and I ordered a T-bone steak, medium rare. It was a very special evening.

Our friends were always welcome in our house. When I was in high school, it wasn’t unusual for me to come downstairs in the morning and find friends sleeping on the couches. A lot of friends came to our house just to hang out with my parents. When I was a senior in high school, a couple of guys who had graduated with my sister the year before were working the midnight shift, same as my dad, and when I got up to get ready for school, I found them sitting at the kitchen table with my dad, playing Monopoly. The Monopoly game went on for a week, until they all changed shifts.

I left that house when I went away to college. At that point it ceased being my home, but it will always hold a special place in my heart. My parents continued to live in that house through their working years and into retirement. They grew old together in that house, and after they died, the house grew silent. It was very difficult for my sisters and me to clean out stuff that had been accumulated over their 50 years of living in that house. But we did what we had to do. We laughed. We cried. Mostly we remembered. And now another family is making memories in that house. The circle of life goes on. I hope they enjoy the house as much as we did.