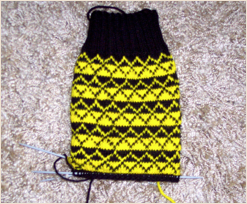 We knitters find inspiration in all sorts of places. I’ve been working away on fan socks–socks done in colors inspired by the recipient’s favorite football teams, both college and professional.

I’ve already mailed Cousin Vickie the Buckeye Arches socks done in the scarlet and gray of her beloved Ohio State University Buckeyes. And now I’m working on Steelers Diamonds, in the black and gold of the 6-time and current Super Bowl Champions, the Pittsburgh Steelers. These socks are also for Cousin Vickie who, in spite of living in Cleveland, has the good sense to be a Steelers fan. ☺

As you can see from the picture, the leg of sock #1 is done. What you cannot see is that I’ve started the heel flap. I decided to do a solid black heel flap rather than try a striped flap. Why? Because I started knitting the heel flap while on a car trip and a one-color heel was easier to do while riding in the car. LOL

I didn’t work on the socks at all yesterday because I received a very special package containing Apple’s brand new operating system for the Macintosh, OS X version 10.6, a.k.a. Snow Leopard. It was released yesterday and a copy was delivered to my door by the FedEx guy.

So, yesterday I updated the SuperDuper bootable clone of my MacBook, made sure I could boot from the clone, and then took the plunge. My plan is to use Snow Leopard on my MacBook for a while to see whether there are any conflicts with the applications I use and to see how I like it. If all goes well, I’ll install it on my iMac.

Installation couldn’t have been easier. I inserted the upgrade disk into the drive and when the disk window opened, I clicked “Install.” The installation took about an hour and was smooth as silk. I don’t think I lost a single file. So far, all my applications appear to be operating well and my printer works fine.

Snow Leopard has a few new features which I like very much. But most of the changes are under the hood, so to speak. Snow Leopard is supposed to take advantage of the 64-bit technology of the Intel chip. I’m not geeky enough to understand what that means, but I do understand that Snow Leopard is fast. Really fast. I wonder how long I will be able to go before I install it on my iMac? LOL

Yesterday I posted to this ever-fascinating blog a mini-rant about a demented right-wing nut-job named Rex Rammell who is running for political office in Idaho and “joked” that he would purchase tags to hunt President Obama. It appears that there are a few Republicans in Idaho who are willing to speak out against such inappropriate and incendiary comments. When faced with criticism from fellow Idaho politicians, Rammell responded by saying, ”Anyone who understands the law knows I was just joking, because Idaho has no jurisdiction to issue hunting tags in Washington D.C.” http://www.msnbc.msn.com/id/32601868/ns/politics/

I guess this guy just doesn’t get it. Here’s a clue, Sherlock. It’s inappropriate to joke about killing the president of the United States. Period.