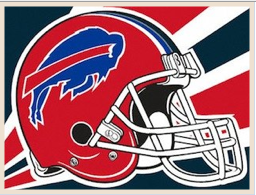 As you know by now, dear reader, I’m a football fan. By football I don’t mean that silly school-girl game that we here in the U. S. of A. call soccer. I mean good old ‘Merkin football. Rock ‘em, sock ‘em, hit ‘em hard football.

I like to watch profession football, too, the National Football League. But I usually watch only when a team I like is playing. I have two favorite teams in the NFL, the Buffalo Bills and the Pittsburgh Steelers. The teams have a lot of similarities. Both are located in former industrial cities that have been reinventing themselves since the demise of the steel and related industries in the United States. Both cities have a working class character and fanatical and utterly loyal fans.

But while the Steelers have won a total of six NFL championships, the most recent in 2009, the Bills have to go back to the AFL of the 1960s to boast of league championships, although they did play (and lose) in four NFL championship games, a.k.a. Super Bowls. Pittsburgh, with its Super Bowl-winning Steelers and Stanley Cup-winning Penguins, is known as the City of Champions. Buffalo, uh, isn’t.☹

Growing up near Pittsburgh explains why I am a Steelers fan. But how do I explain being a Bills fan? It’s a long story, so hunker down.

When I was barely a teen-ager, I got really bored one Sunday in 1964. Back in those days, there wasn’t a lot of choice in one’s television viewing. TV consisted of just the network channels. And on Sunday afternoons, two of those networks showed professional football games. We had only one television, and my dad was watching football.

My dad was a true-blue, dyed-in-the-wool Steelers fan, but he loved the wide open offenses of the old American Football League, the AFL. So on Sundays, he’d often watch the AFL game, switching over to the Steelers game during commercial breaks, then back to the AFL game.

At the time, football was a mystery to me. In true small-town fashion, I went to all the high school games, but I never understood what was going on. On this fateful Sunday, bored out of my gourd, I wondered whether I might enjoy watching football if only I knew what was going on. So I asked my dad if he would explain it to me. My dad, of course, jumped at the chance to teach me about football. I sat down with him, and he explained to me the basics of the game. As soon as he explained the four downs to me, the game suddenly made sense. And, voilà! A football fanatic was born. Who knew? LOL

Watching football together became a weekly event for my dad and me. Each week he explained another aspect of the game, patiently answering all my questions. I learned about slot receivers and linebacker blitzes, double reverses and quick kicks. Every Sunday we would watch football together and ooh and aah at the razzle-dazzle play of those great AFL teams and players: John Hadl, Len Dawson, Darryl Lamonica; Lincoln and Lowe; Lance Allworth and Don Maynard. It was great fun.

So how does this explain my love for the Buffalo Bills? Well, that very first game I sat down to watch with my dad was being contested between the Buffalo Bills and the Boston Patriots (now the New England Patriots). I knew nothing about either team, but instantly fell in love with the Bills. Why? Well, they had a player named Cookie Gilchrist. How could a 13-year-old girl not simply fall head over heels for a team that featured a player named Cookie Gilchrist?☺ Buffalo went on to win the AFL championship that year, and I cheered for them all the way and have been cheering for them ever since.

At the start of every season, I have hope that this will be the season when Buffalo turns things around. By the end of every season, the Bills always manage to once again break my heart. ☹ But win or lose, I love my Bills. Thank goodness my other favorite team is the Steelers. ☺

Now I’ll answer the question that you, dear reader, are dying to ask. For whom do I cheer when the Steelers and Bills face each other on the gridiron? That’s easy. I cheer for the NFL team that is the dearest to my heart, the Buffalo Bills. Thankfully the Bills and the Steelers don’t face each other very often.