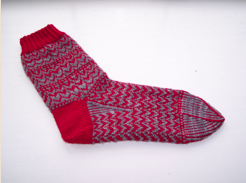 I know the suspense is killing you. What kind of progress is Pinko Knitter making on Buckeye Arches #2? Has she succumbed to the dreaded Triple-Ess, Second Sock Syndrome? SSS has been the downfall of many a would-be sock knitter. But not this one. I’m immune to SSS. Even when I don’t enjoy knitting the first sock–a rarity, but it did happened once when I did some twined knitting–I’ve always cast on sock #2 immediately after finishing #1. I guess its just something perverse in my personality. LOL

SSS is nothing to sneer at. Some knitters have a basket full of single socks awaiting a mate that may never come. Seriously. Because of this some knitters go to great lengths to prevent SSS. Some cast on both socks at once, on separate needles, and alternate. Others cast on and knit both socks at once on the same needles, either two circulars, a la Cat Bordhi, or one circular, a la magic loop.

I will admit to doing the first more than once, but I cannot abide knitting both socks at once on the same needles. Although I sometimes knit socks using the two-circular needles technique, I tried doing two socks at once one time and hated it. I don’t use magic loop for socks, but I do use it for sweater sleeves and collars.

I’m not bragging about my second-sock-knitting prowess. I’m not dissing knitters who find it difficult to start, let alone complete sock# 2. After all, I’m the knitter whose Dale of Norway sweater is 95% completed but still sits forlornly in the knitting basket, neglected and getting angrier by the day because two winters have passed since it was cast on. I will finish it in time to wear it this winter, I promise.☺

But I digress. You, dear reader, have been waiting patiently for a progress report on Buckeye Arches #2 and I won’t make you wait any longer. As of last night, I have completed the heel flap, turned the heel, picked up the gusset stitches, and knitted two gusset decreases. Yeah, I’m on fire! LOL 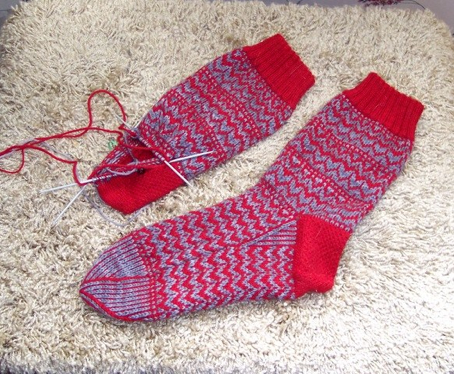