A lot has been happening in Pinkoknitter’s fiber world, and I really must spend some time over the next few days updating my blog. As you already know, I recently bought a Schacht 15-inch Cricket Loom, which is a rigid heddle loom. 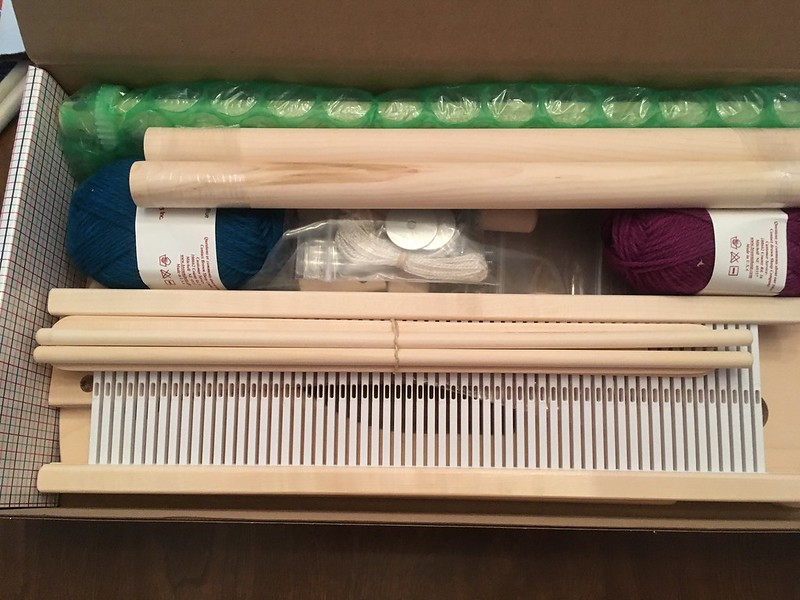 The Cricket loom come unfinished and unassembled. I purchased mine from The Spinnery on Etsy. Great prices and great service. 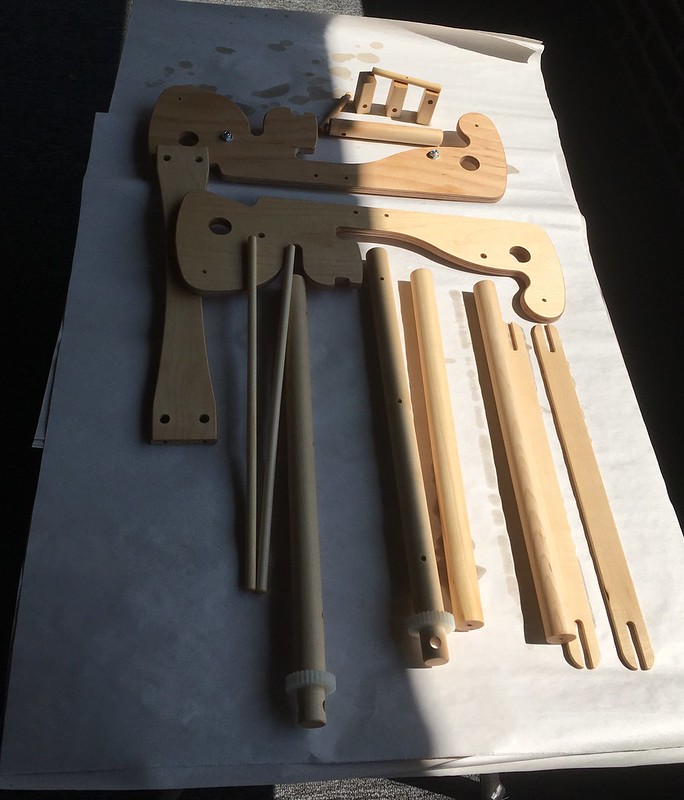 Many Cricket owners leave their looms unfinished, but I decided to finish mine with clear Danish oil. I was too lazy to move the table to a part of the porch where the lighting was consistent. So sue me for photography malpractice. 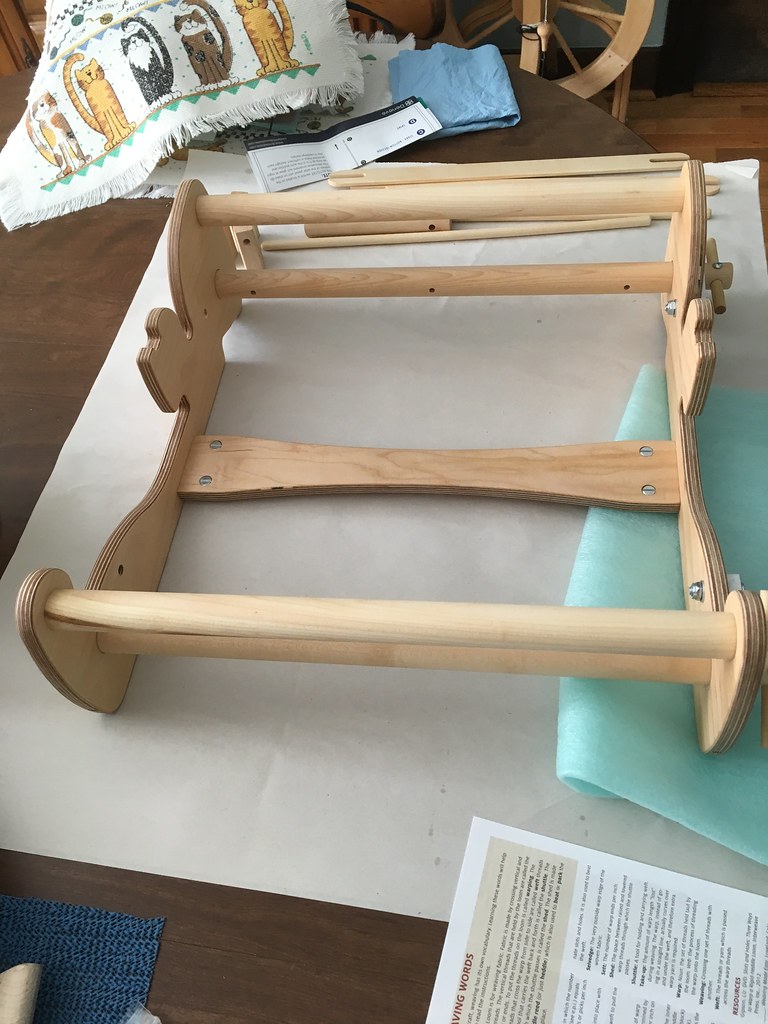 The loom is really simple to assemble. I didn’t drop a single F-bomb when I put it together. Not a single one, it was that simple.

I have mulled over learning to weave for quite a few years, but always decided against it because warping/dressing a loom, that is, measuring out all the warp threads and putting them on the loom through the correct slots and holes in the correct order without ending up with a massive amount of yarn vomit, seemed to me to be a daunting task.

But as my stash of handspun yarn has continued to grow, and my stash of sock yarn has not diminished, I became desperate to find a way to do some stash-busting. And weaving is a great way to bust a stash. Although weaving uses less yarn than knitting, it is much faster. In the time would take me to knit a single 5- or 6-feet-long scarf, I could weave a whole wardrobe of scarves. And it turns out that warping a rigid heddle loom isn’t all that daunting a task. In fact, it is pretty easy. 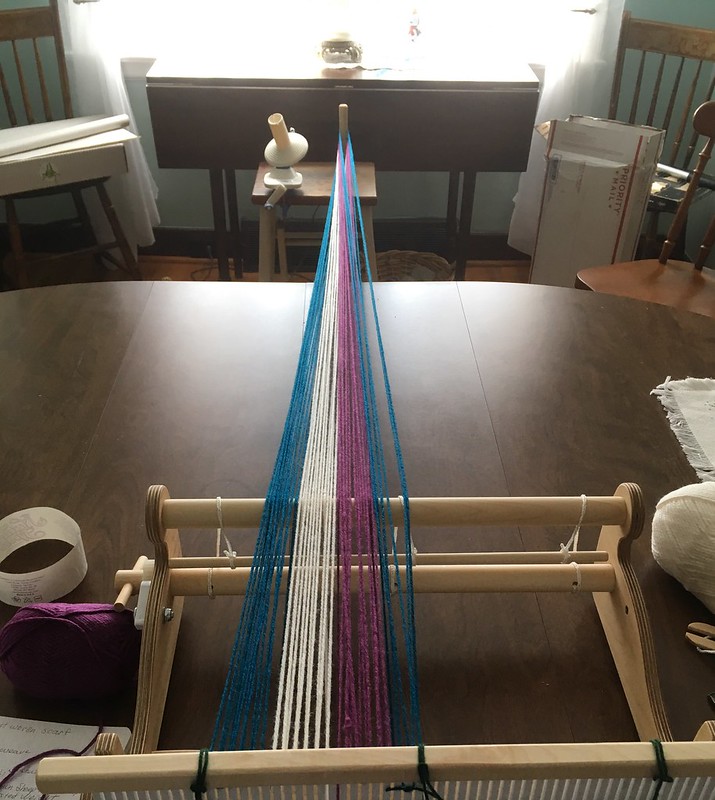 I clamped the warping peg to my multi-purpose “mashed potato” stool which is also the permanent home of my ball winder. 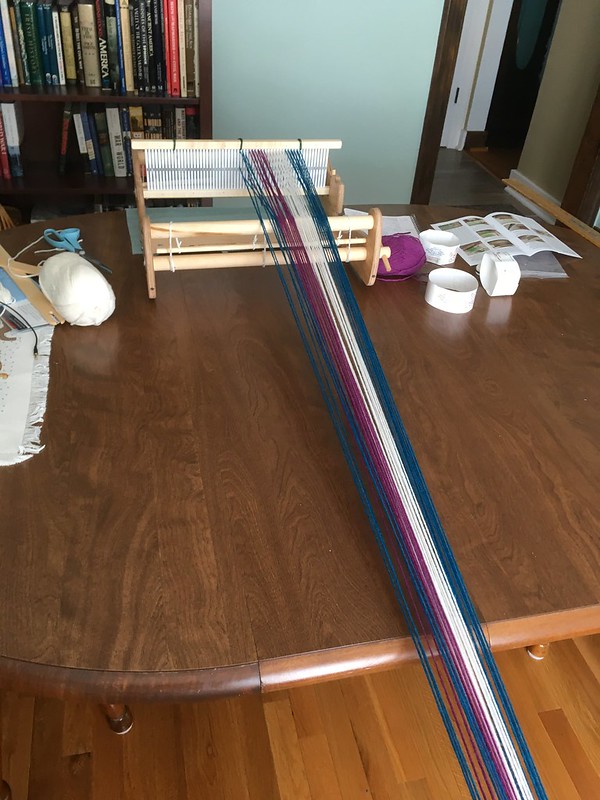 It took me two false starts before I got it right, but once I figured out what I was doing wrong, I zipped through the process. 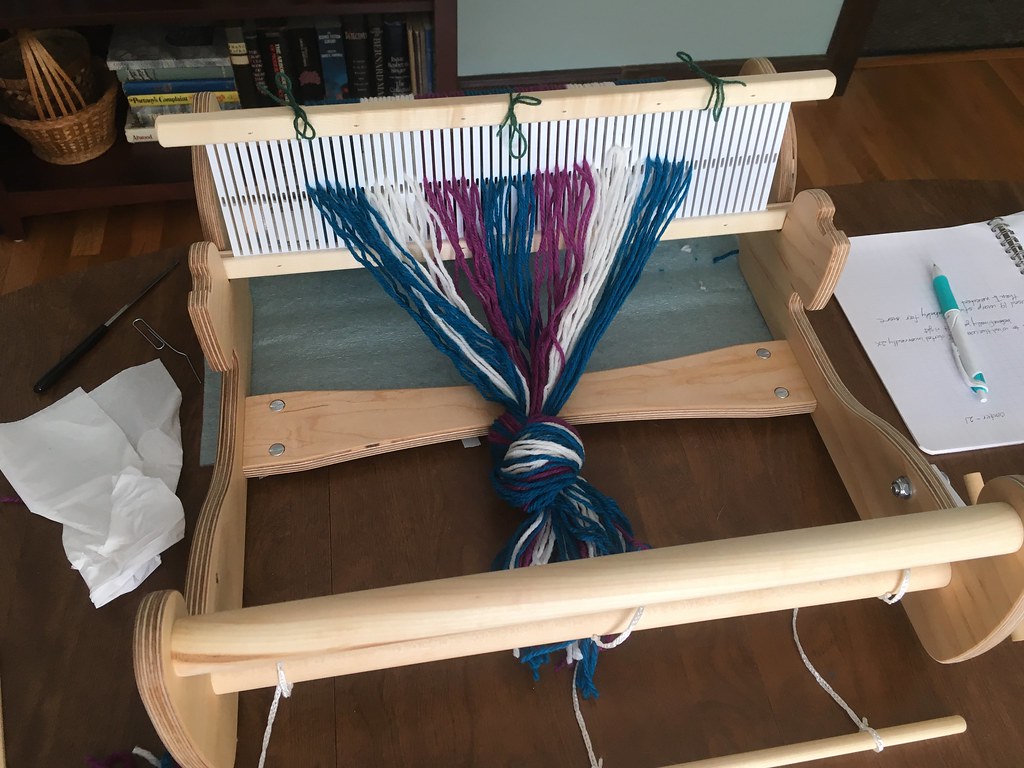 This picture shows the front of the loom with the warp wound onto the warp beam in the back, which you can see in the next picture. In this picture you are looking at the part of the warp that was wound around the warping peg. I cut the loops and tied a loose overhand knot in the end of it and then wound the yarn on the warp beam. I couldn’t have done it without the help of my DH who held the warp taut while I turned the knob that moves the warp beam. 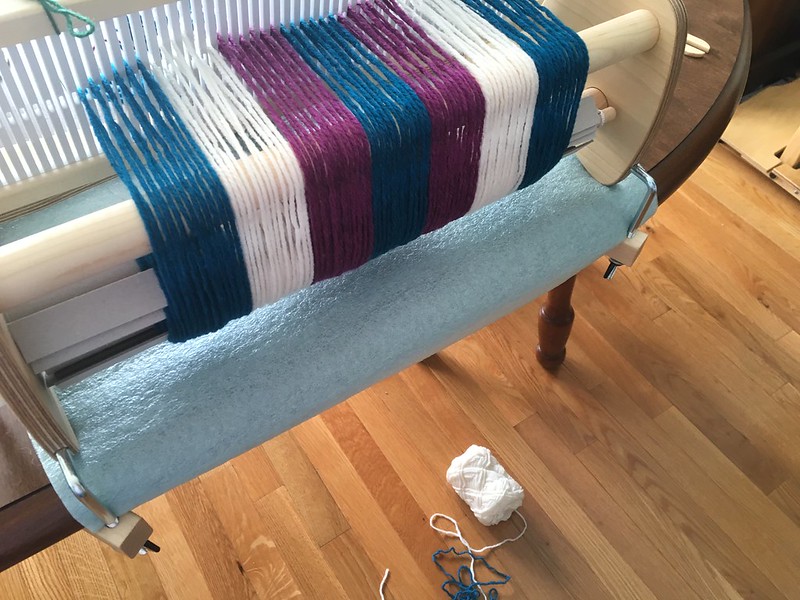 With each turn, I needed to insert a warp separator to keep the yarn from sticking to itself as it wound round the beam. Many weavers use kraft paper, but I bought some cardboard warp separators because I thought they would be easier to use than paper. You can see the warp separators in this picture, and you can also see that my warp is in need of a good tug from the front side to even up the tension on the warp threads. 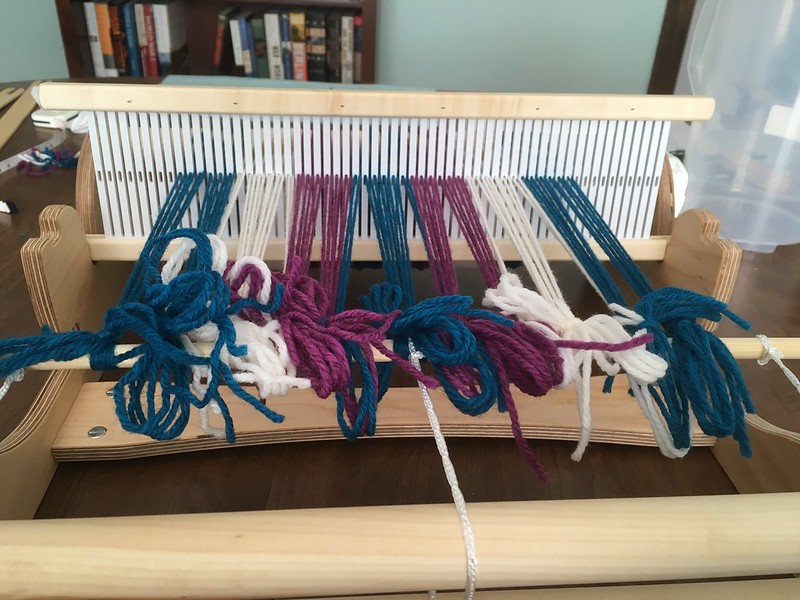 This is the front of the loom again. I got all the warp threads into their proper hole or slot and I tied them to the front apron and made sure they were very taut. I just need to roll them onto the cloth beam, place a separator when the bows are, weave a header to spread the warp evenly, and I’ll be ready to start weaving. 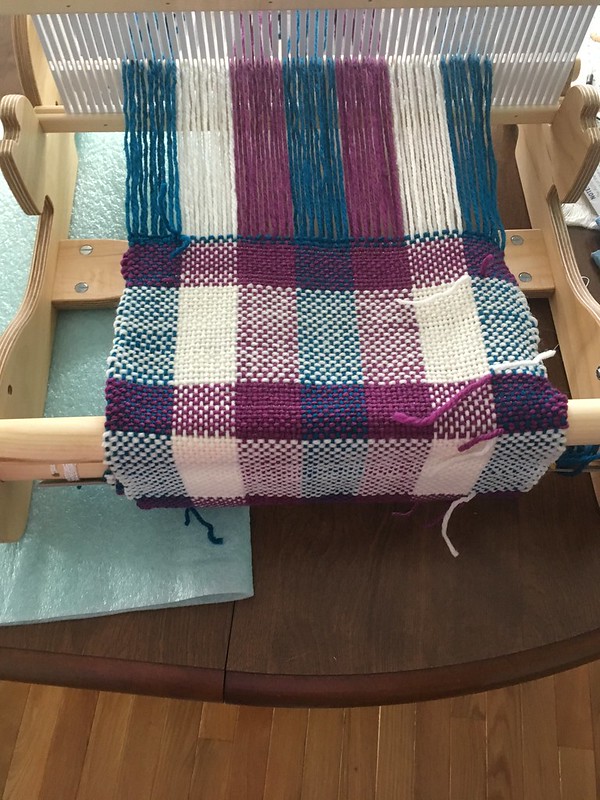 So, I forgot to take pictures while the weaving was in progress, but here is a picture of the scarf once the weaving was finished. The extra length of warp became fringe. I completed the weaving in a single evening. The ends sticking out are where I changed colors. Just like knitting, weaving requires weaving in ends. Once the scarf is washed, I will snip the ends off.

I have enough sock yarn in my stash to knit at least 100 pairs of socks. A pair of socks takes me at least 2 weeks to complete; a woven scarf takes only a few hours. I know this for a fact because–– 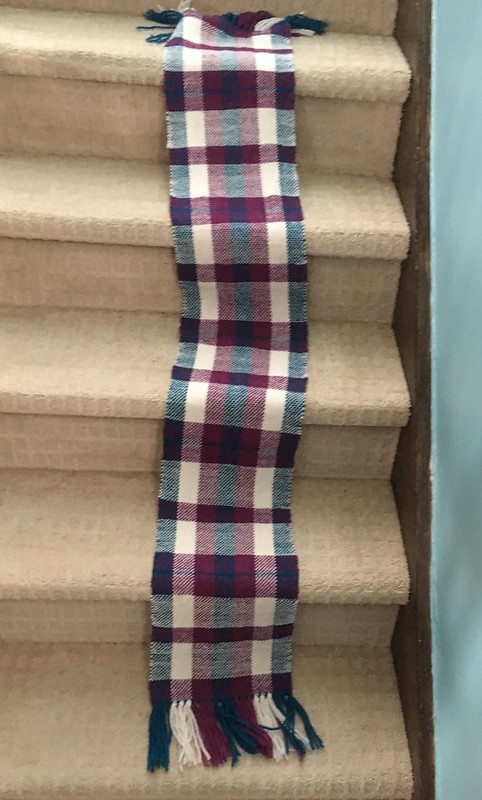 The finished scarf, washed and trimmed. I made up the pattern myself using a couple of published patterns as inspiration. The colors are not really my kind of colors, but the blue-green and purple-pink yarn came with the loom and I had the natural in my stash. It is all Brown Sheep Nature Spun worsted weight wool. 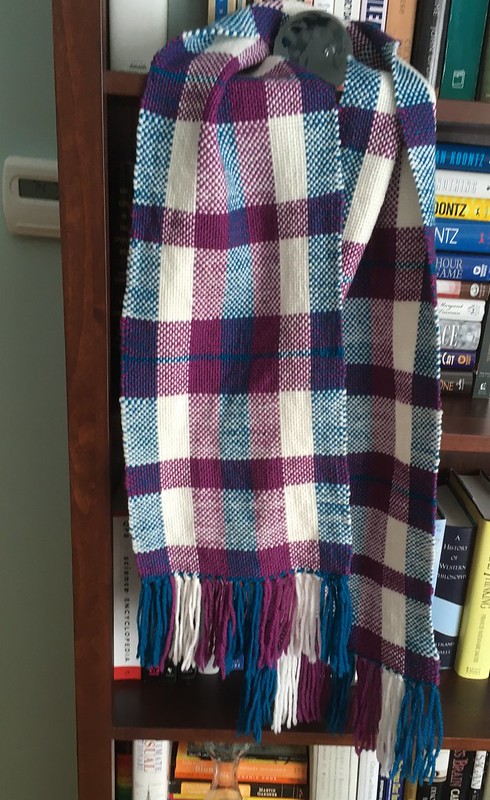 I should be able to slam through my sock yarn stash using my loom. And once I am satisfied that my weaving skills are passable, I will start using some of my hand-spun yarn for weaving. And once I have at least made a dent in my stash, I might even buy some cotton or cotton-linen yarn and make some kitchen towels, placemats, and napkins. But all in good time, dear reader, all in good time.

All in all, I enjoyed this project immensely. I wasn’t sure I would like weaving, which is why I decided to buy a relatively inexpensive loom. I was surprised how relatively easy it was and how natural weaving felt. It wasn’t awkward, not even at first. It just felt like something I’ve done all my life although the only weaving I’ve ever done was making potholders with those stretchy loops they used to sell at the five and ten on the corner of Jefferson and Third.

If I enjoy my next several projects, there just might be a larger rigid heddle loom in my future. Stay tuned.